The base Rabbit ECU is an Arduino compatible ‘shield’ that makes it easy to create a DIY ECU with Arduino Due as the controller. The base Rabbit ECU can run a 4 cylinder engine with fully sequential injection and ignition and has some simple I/O to spare. 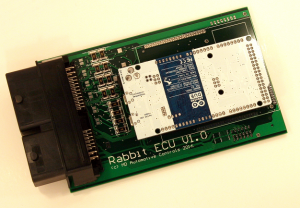 This setup is great for throttle-body and port fuel injected engines. But because of the I/O limits of the Due, variable cam control, direct injection, fuel pressure and electronic throttle control are not possible.

The Sparkdog PF-DI extension overcomes these limitations by adding additional I/O drivers and using a Teensy 3.5 controller in place of the Arduino Due.

It is important to control the high pressure injectors in peak-hold PWM mode. The injector is supplied with boost voltage on the high side and switched to ground for a few hundred microseconds on the low side to rapidly build up the solenoid current. A lot less current is required to keep the injector open, so it is supplied with 12V on the high side and PWM switched to ground on the low side. 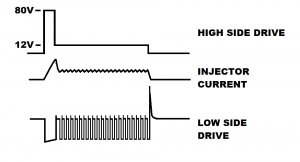 Using this technique, the injector can be accurately controlled and consume as little power as possible. For now, the PF-DI daughter-board uses an external DC-DC converter for the boost voltage supply.

Direct injection generally fires for a much shorter duration than port injection, partly because the window of time that injection can occur is limited to a part of intake and compression stroke.

There are two modes of injection commonly used:

Rabbit ECU with Sparkdog PF-DI is concentrating on homogeneous injection. This is very common for GDI vehicles because it avoids the problem of excessive NOx emission in stratified mode.

Like most GDI electronic drive systems, Rabbit ECU with Sparkdog PF-DI uses a multiplex arrangement where a common grounding circuit fires two direct injectors, but at different times. This is done to reduce complexity and cost.

In the diagram above, the injector fires every second low switch event (pink), because the high side (red) is disabled every other event.

Another feature of GDI engines that adds complexity is the use of variable and high pressure in the GDI fuel rail.

The source of this high pressure fuel supply is a mechanical fuel pump that uses a piston to compress and deliver fuel to the common rail. An electro-magnetic solenoid valve also known as a ‘spill valve’ regulates the amount of pump piston stroke that actually displaces fuel. A small stroke leads to a small fuel flow and low pressure and a long stroke leads to higher fuel flow and higher pressure. 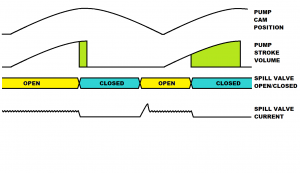 The target fuel pressure is dependent on engine speed and load. Generally the mapped fuel pressure increases as load increases. The Sparkdog PF-DI board includes a PWM peak-hold driver that energises the spill valve at the correct time to control fuel flow and pressure to the target value in the range 5 – 20 MPa. 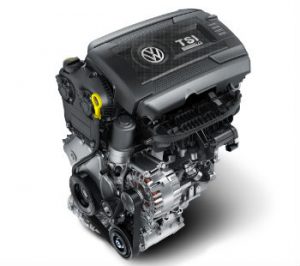 To fit the Rabbit ECU, the original Bosch ECU was removed, and a plug-and-play harness was made. It is hoped that the Rabbit ECU can control all of the functions of the OEM ECU.

Here is some video of the engine fast idling well for the first time, with no throttle control. You can follow the progress of the Rabbit ECU project and the Golf GTI MK6 here at the Facebook page.