Classic car EFI systems like Bosch Jetronic came about before micro-processors were developed for use in vehicles. Jetronic is commonly found in EFI vehicles from the early 70’s up to the mid 80’s. These systems are simple and reliable. But back in the 70’s automotive systems weren’t designed to be connected to diagnostic or tuning tools so working with an old system that isn’t running right is a challenge and requires an Air Fuel Ratio (AFR) sensor and display.

The way these systems work is electro-mechanical. The major mechanical part is the vane type Air Flow Meter (AFM) that measures the volume of air entering the engine. By measuring the air flow rate, the Jetronic controller could adjust the injector pulse width to deliver a reasonably constant AFR. 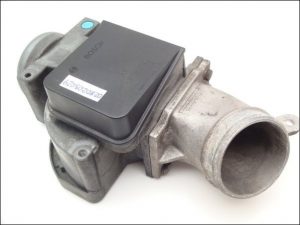 The vane AFM relies on the the effect that as more air-flow passes through, the more the vane is pushed open against spring pressure. There is a potentiometer attached to the vane pivot that outputs a rising voltage for an increasing air-flow. 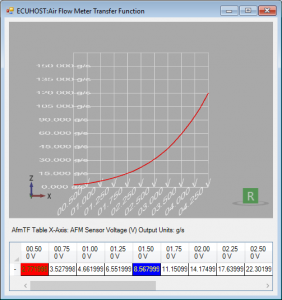 The voltage output versus airflow typically looks like the above graph. At low air-flows there is a greater change in voltage output for say a doubling of airflow than there is at high air-flows. This mostly comes down to the AFM vane construction and spring loading. As the spring becomes compressed, it takes a lot more force on the vane (caused by the air-flow) to cause more movement.

The AFM was calibrated at the factory by setting the return spring pre-load and wiper offset screw, laser-trimming of the potentiometer strip, and setting of the idle bypass mixture screw.

A commonly reported issue with this type of AFM is the relaxing of the spring over many years. Because the spring weakens, the AFM vane over-deflects, indicating more airflow, and causing a rich AFR.

The other major issue is the wearing out of the potentiometer strip. The track that the wiper travels across wears right through in mid-load areas, resulting in an intermittent contact and flat-spotting.

I used my DIY project AFR meter/display and a Bosch LSU4.2 sensor mounted at the tail-pipe for the tuning. First thing I noticed about my tuning project was that somebody had already tinkered with the AFM, opening the cover and adjusting the spring pre-load. I had no way of knowing how the AFM had been adjusted, but the symptoms when driving were:

The light load AFR can be checked by revving the engine at 2000 rpm, as shown here on the GP-meter 6.0. 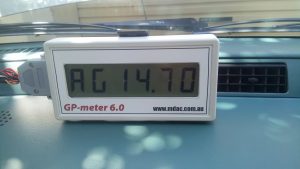 These two adjustments can lean or richen the AFR, but have slightly different effects:

So in my case, I adjusted the wiper offset a few mm towards the + mark because I mostly wanted a rich effect at high loads.

I did this a little at a time, getting closer to my target AFR of low 13:1 at high loads. Then I needed to trim the AFR back at light loads by rotating the spring pre-load 6 clicks CLOCKWISE the bring my light load AFR back to around 14.7:1. 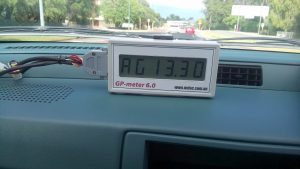 The Jetronic AFM also has an Allen Key adjust for tuning the idle AFR. Turn the adjuster CLOCKWISE for RICH and COUNTER-CLOCKWISE for LEAN. 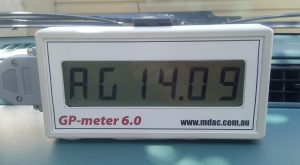 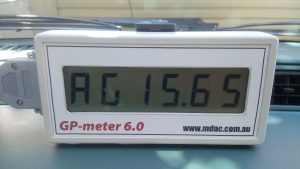 One comment on “Classic Car EFI Tuning With The GP-meter 6.0”