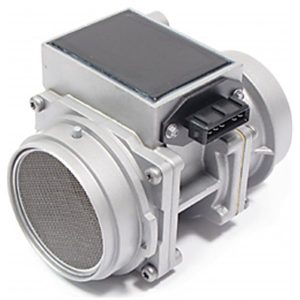 The basics Air Flow Meters (AFMs) have been widely used in EFI systems since the 1970’s. The simplest AFMs are basically a hinged ﬂap with a spring return. More air pushing past the ﬂap causes more opening of the ﬂap, and a change in voltage from a potentiometer attached to the ﬂap. Importantly, these meters measure volume of air passing through. The signal needs to be corrected for air density before the fuelling amount is calculated. Given the air mass ﬂow rate, injector sizing and target air fuel ratio, the injector pulse width can be calculated. This is EFI in a nutshell. Most modern EFI systems use the mass measuring hot-wire AFM. These are also called air mass meters to distinguish them from volume measuring devices, and have the advantage of no moving parts. They work by the control circuit passing a current through a hot wire suspended in the airﬂow. The control circuit senses a drop in the temperature of the hot wire when the airﬂow increases, and allows more current to ﬂow to bring the temperature back to a set point. The amount of current ﬂowing is the basis for estimating the mass airﬂow. In this post, let’s take a look at a typical hot wire AFM with a simple 0-5V output. The 5WK97012 is a very common AFM made by VDO and other OEMs. I found this AFM installed in my Z18XE powered Holden Astra. 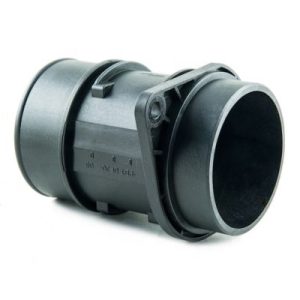 I have done plenty of DIY EFI work in the past with speed-density based EFI systems that use a manifold absolute pressure (MAP) sensor as the primary load input. Working with an AFM was new territory, and I didn’t have a spec sheet for the meter. Of course I could have just ﬁtted a MAP sensor and been done with it, but the Rabbit DIY ECU I wanted to install is a budget DIY system that I want to work with the OEM sensors to avoid extra costs.

DIY graphing your AFM on the road

The most important thing to know about an AFM is the output curve. Usually the output is a voltage that changes with a change in air mass ﬂow. You can gain a lot of info by simply driving the car before you modify it, and measuring the voltage output at different engine speeds. The only problem is you need to go wide open throttle and have a pretty good idea of the volumetric efﬁciency (VE) of your engine. You can safely estimate 0.8 for a 2-valve head and 0.9 for a 4-valve head. Let’s skip the maths and get right to a good equation that estimates g/s airﬂow for an engine of litres capacity D, volumetric efﬁciency VE and running at RPM R – mass ﬂow (g/s) = (R x VE x D) / 98 mass ﬂow (g/s) = (R x VE x D) / 98. For my 1.8L Z18XE engine, this gives a wide open throttle mass ﬂow of 107 g/s at 6500 rpm. By going wide open throttle at varying RPMs, measuring and recording the RPM and AFM voltage output, you can get a pretty good AFM curve as a starting point.

Graphing your AFM with a DIY ﬂow-meter

So what happens if your project isn’t running and you don’t have the datasheet for your AFM? One method that works for me is a DIY ﬂow-meter using a hobbyist anemometer. 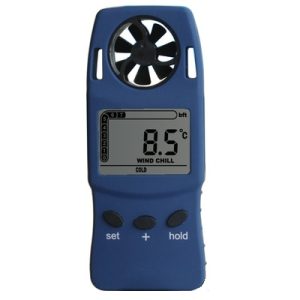 This low cost unit from Jaycar gives a nice big back-lit m/s output. If we can mount it right at the centre of our DIY ﬂow-meter tube, and draw air through the tube and AFM, we should be able to calculate the mass ﬂow g/s. Measuring the g/s and AFM voltage output at different airﬂow rates gives us all the data we need to build our AFM output curve. In the spirit of DIY, we will use 4 inch PVC pipe for our DIY ﬂow-meter tube and a variable speed vacuum cleaner for airﬂow! It is important that the PVC pipe is at least a few feet long, and that the anemometer is positioned half way length wise and centrally within the pipe cross-section, as shown here. 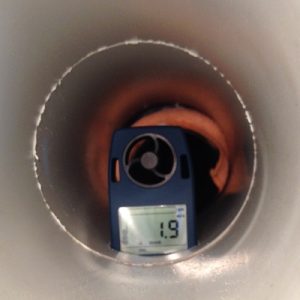 Why is this important? You might notice the inlet of your AFM has a mesh grille a bit like a honeycomb. Turns out that the grille helps the smooth the airﬂow. Making sure the airﬂow is smooth (laminar ﬂow) is important when measuring ﬂow – especially within a tube. 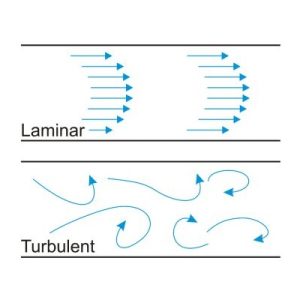 When the ﬂow is laminar, the measurement of ﬂow is more reliable. But the downside is that the ﬂow varies along the cross section of the pipe. Fastest at the centre-line, and zero at the walls. Our DIY ﬂowmeter is far from perfect because it measures the ﬂow ‘mostly’ at the centre-line, and also obstructs the ﬂow a little. Doing a bit of maths to factor this in tells us that the velocity measured by the anemometer will be around 1.25 times more than the average velocity, so we will use a ‘fudge factor’ of 0.8 in our calculations (1/1.25). Here we will use: 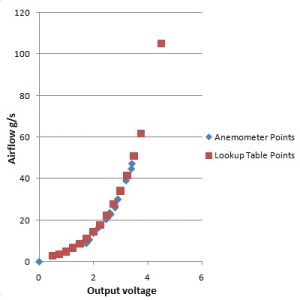 The blue points are the data calculated from the DIY ﬂow-meter. The red points are the ﬁnal curve points I programmed into the Rabbit DIY ECU.
How did it work out? So what have we achieved here? I was able to produce an output curve for an AFM with no data-sheet and without running it on an engine. Once I actually ran the car with this curve programmed into the ECU, it ran pretty well! To be honest there were a few points where the AFR was a bit off (I used the GP-meter 6.0 for measuring AFR). Around 16:1 at idle caused a poor idle and some rich spots around 14:1 at mid load. But for the most part, the AFR was pretty close to 14.7 – not bad for a DIY effort with a $50 hobbyist anemometer! It didn’t take much driving to notice that AFM tuning is not quite like speed density tuning. AFMs have some characteristics that cause the AFR to vary a lot during throttle movements. And how much airﬂow when cranking? The AFM isn’t very good at that either. Next post: How to deal with AFM downsides.